Eclipse, Gives Me The Creeps 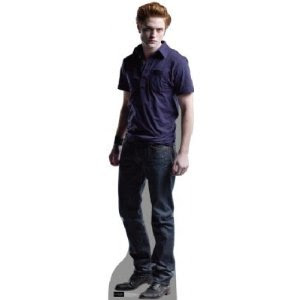 I have never favored Edward Cullen, he is good looking in a strange way. Except he isn't good enough (in my opinion) to play Edward from the book. Stephanie Myers set her bar high for actors in the movie making of Twilight. Some of you may not agree with me, except Robert Patterson is only the best of the worst.
But that is not my point right now. Anyway I never favored "Edward," and I think he knew that. Because he gets his revenge through life size stand-ups of himself and other cutouts of the Twilight crew. Example:
I was in an iparty store, browsing around by myself, and I wandered into the back. I turned a corner to find Edward standing in front of me! But it was a life-size stand up, but I hadn't realized that yet and ran screaming into a shelf. Ever since, I have disliked Twilight stand ups. Until I got one in the mail, from my aunt and cousin. So now whenever I walk into my room, I jump because it looks like Jacob is standing right there.

But it is useful in a way, if you position it just right in a dark room, it will scare your victim right out of the living. Examples: grandmothers, mothers, aunts, cousins-grandpas are usually off limits for they may be faint of heart. I also suggest to keep them away from fathers, men usually do not shriek and run away like the above. They tend to defend themselves against "threats" like that, usually physically.

-Olivia
Posted by Olivia at 9:35 AM No comments: Links to this post